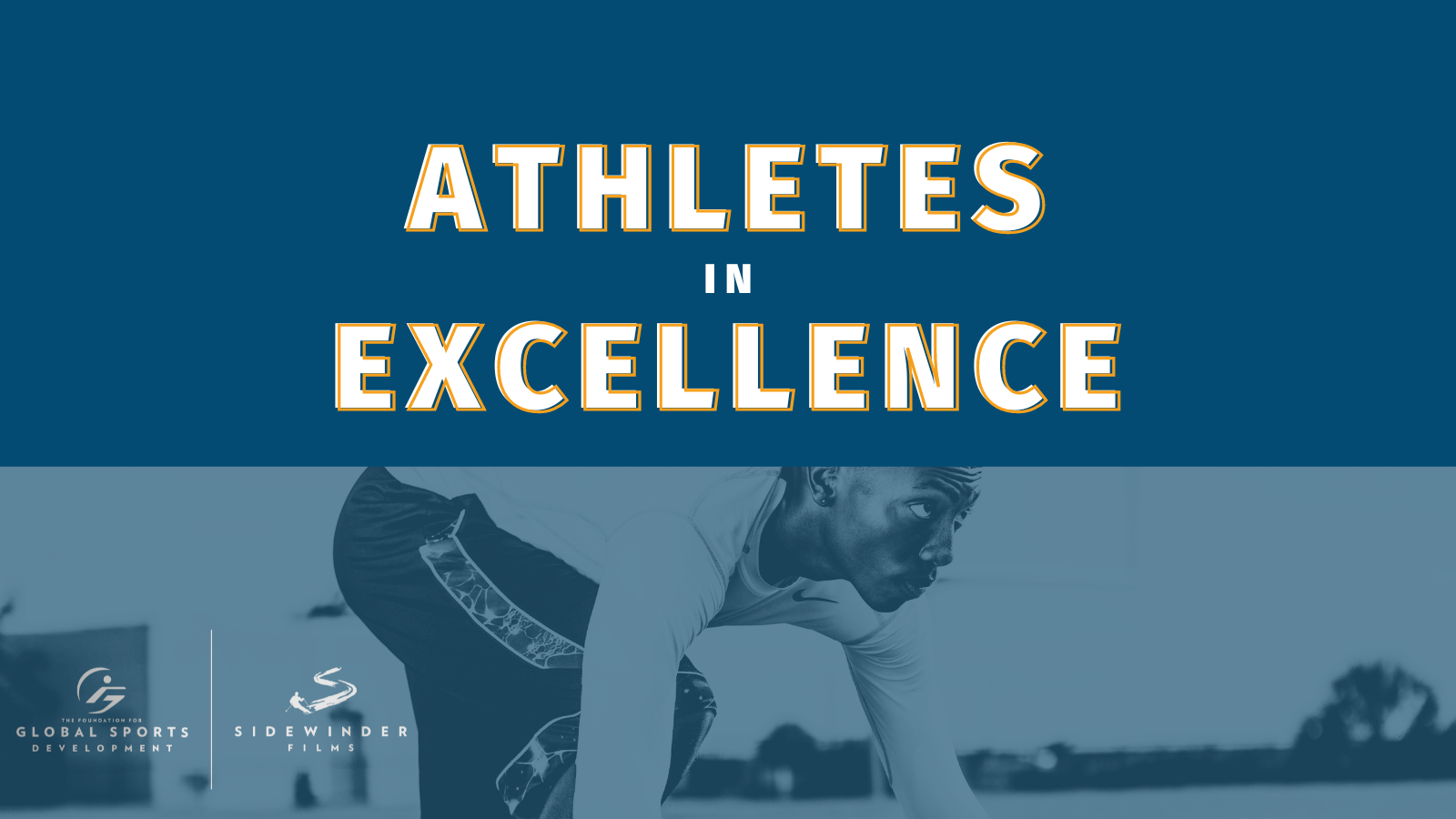 The award recognizes high-performance athletes who have made an impact through community service and mentorship.

The Foundation for Global Sports Development (GSD) has announced the ten recipients of its 2022 Athletes in Excellence Award. The awardees, who must be nominated, are being honored for their achievements in sport and community service involvement.

“As an organization, we know the positive impact sport can have and admire athletes who harness it to create change,” said GSD Executive Board Member, Dr. Steven Ungerleider. “In reviewing nominations, we look closely at each athlete’s leadership, community service, and mentorship work. This year’s winners have shown the same dedication to their communities as they have when training and competing,” adding, “We want to thank all the nominators for bringing these remarkable individuals to our attention.”

The award comes with a $10,000 grant which past recipients have used to continue pursuing their community service work or as a donation to organizations they have volunteered with. “Award winners use the funds to create even more positive change,” said David Ulich, GSD Executive Board Member. “We view the grant as a way to help each athlete expand the impact of their work in the communities they serve.”

GSD supports programs and initiatives that celebrate the benefits of sport for youth around the world. For additional details about GSD, the Athletes in Excellence Award, or its other programs, please visit www.globalsportsdevelopment.org.

Kevin Battle (US Collegiate All-American, Rugby)
A rugby Collegiate All-American from 1997 – 2000, Kevin coached rugby for UC Santa Barbara from 2000 to 2012 and has been coaching at the Santa Barbara Rugby Academy since 2009, helping grow the sport and providing higher education opportunities for many of its students. In 1997, he founded United Way’s “Fun in the Sun” in Santa Barbara providing over 300 low-income youth with a summer camp experience and now also works with Rugby LA to enrich and enhance the lives of underserved youth throughout Los Angeles. Nominated by Stuart Krohn.

Rayfield Beaton (US Collegiate Track and Field)
Originally from Guyana and considered one of its most accomplished athletes, Rayfield Beaton attended USC where he dominated the 800- and 1,500-meter races and set records in 1978. Selected as a member of the 1976 Guyana Olympic team, he never competed due to the “African Boycott” that protested New Zealand’s participation given its ties to South Africa and the then apartheid regime. Now a coach, he trains high school, college, and professional athletes and works for all athletes to have equal opportunities to train and compete. Nominated by Culver City Education Foundation.

Gwen Berry (US Olympian, Hammer Throw)
A two-time Olympian, Gwen is bringing awareness to social injustice and educating others on the issues facing Black and female athletes. She was instrumental in getting the USOPC to change Rule 50 and stop punishing athletes for making inequity statements, which earned her the 2020 USA Track and Field Humanitarian Award and the 2020 Toyota Humanitarian Award. In addition to coaching at Tennessee State University, Gwen has been a volunteer hammer throw coach since 2009 for various camps and universities. Nominated by Candace Cable.

Shannon Kleibrink (Canadian Olympian, Curling)
A Bronze medalist in the Turin 2016 Winter Olympics, Shannon is an active member of Alberta’s curling community. In 2005, she partnered with the Okotoks Curling Club to launch the Kleibrink Youth Curling Academy so local youth could try the sport. In 2021-2022, she founded the Ready to Rock program, which introduces curling to black, indigenous, and children of color as well as to low-income youth, aiming to increase diversity in the sport and remove barriers to entry. In its inaugural year, Ready to Rock allowed more than 500 newcomers, over 37 curling community centers, to learn the fundamentals of curling. Nominated by Curling Alberta.

Juan (Jean) Maggi (Argentinian Paralympian, Para Alpine Skiing)
Jean, a para alpine skier, participated in the Vancouver 2010 Paralympic Winter Games less than a decade after exercising for the first time in his life. At age 37, he got an adaptive bike and trained for the New York Marathon, which he completed in 2003. Since then, Jean has run other marathons, completed Ironmans, played wheelchair basketball, tennis, and golf, crossed the Andes on horseback and in 2015, biked to the highest point in the Himalayas that can be reached with an adaptive bike (18,379 feet). As a motivational speaker, he asks that his appearances be paid for in adaptive bicycles to be given to others who need them. He has set up a foundation to field applications and help distribute the bicycles and has founded a non-profit to assemble adaptive bikes run by individuals with disabilities. Having contracted polio as a child, Jean knows what an enormous impact opportunities to be mobile, independent, and do sports can have and is committed to changing lives and societal perceptions of disability. Nominated by The Foundation for Global Sports Development (GSD).

Ignacio (Nacho) Medrano (US Amputee Soccer World Cup Player, Amputee Soccer)
Nacho has helped transform the adaptive soccer landscape in California over his 30 years of playing amputee soccer and participating in 6 Amputee Soccer World Cups. He is currently the Assistant Coach of the US National Amputee Soccer Team and Board Member of the American Amputee Soccer Association. He still plays on the National Team promoting the sport and encouraging younger players to discover their own potential. In 2022, Nacho joined Angel City Sports’ blind soccer program as a coach, teaching clinics to support the US Association of Blind Athletes (USABA) with their efforts to field a team for the 2028 Paralympic Games. Nominated by Angel City Sports.

Leroy Moore (US Paralympian, Cerebral Palsy (CP) Cyclist)
After discovering sport through the United Cerebral Palsy Association’s summer camps, Leroy began volunteering as a camp counselor. In 1988, he earned a spot on the US Summer Paralympic team as a cyclist in the Cerebral Palsy classification and competed in that year’s Seoul games. In 1991, he began working for the United Cerebral Palsy Association helping youth with disabilities. Now an author and Emmy award winning musician (title song for Netflix’s Rising Phoenix), Leroy has founded and co-founded several organizations to support and elevate disabled individuals, the most recent of which, Krip-Hop Nation, is an international network mentoring disabled Hip-Hop artists, poets, and other musicians. Nominated by Candace Cable.

Tiffeny Parker (US Collegiate All-American, Heptathlon and Bobsled)
Tiffany has over 13 collegiate All-American titles in track and field, over 8 USA and international championship performances, and was an Olympic hopeful in 2022. From volunteer coaching, soup kitchens, mission trips, and mentoring, Tiffeny has given back in innumerable ways since 2010. Most recently she has been a youth Athlete Mentor with Ready, Set, Gold! and Classroom Champions. Nominated by Sam Effah.

Olivia (Liv) Stone (US World Para Surfing Champion)
Olivia, a two-time ISA Para Surfing World Championship gold medalist (2020 & 2021), actively uses her platform to educate others about adaptive sports and encourage more women to try surfing. As a Challenged Athlete Foundation (CAF) ambassador, Liv shares her story in front of thousands of people, most recently at the 2022 Superbowl at SoFi stadium, the Switchfoot BRO-AM Foundation’s annual fundraising event, and the Roth Corporate Conference. She also mentors young girls through CAF Surf Camps, sharing her love of the sport and the ocean with them. Nominated by International Surfing Association (ISA) and Challenged Athletes Foundation (CAF).

Cody Young (Canadian Olympic Surf Team 2021, World Surfing League top 70 – 2022)
Cody is an Olympian, who along with his family, oversees the Maui chapter of Surfers Healing, an organization that brings the sport of surfing to individuals with autism. He believes surfing helps everyone connect with the healing power of the ocean and can be especially beneficial to those who may have a hard time expressing themselves. Cody is effecting change one person, one family, one wave at a time, and the smiles brought on by gliding through the water tell him he’s on the right path. Nominated by Tom Pohaku Stone.

The Foundation for Global Sports Development
Established in 1996, The Foundation for Global Sports Development delivers and supports initiatives that promote accessible, fair, and abuse-free sport for youth, through grants, awards, and educational projects. In 2015, it launched its media division, Sidewinder Films, to inspire and educate audiences through films that highlight remarkable, untold stories of sports and life. Visit https://globalsportsdevelopment.org and https://sidewinderfilms.org/ to learn more.