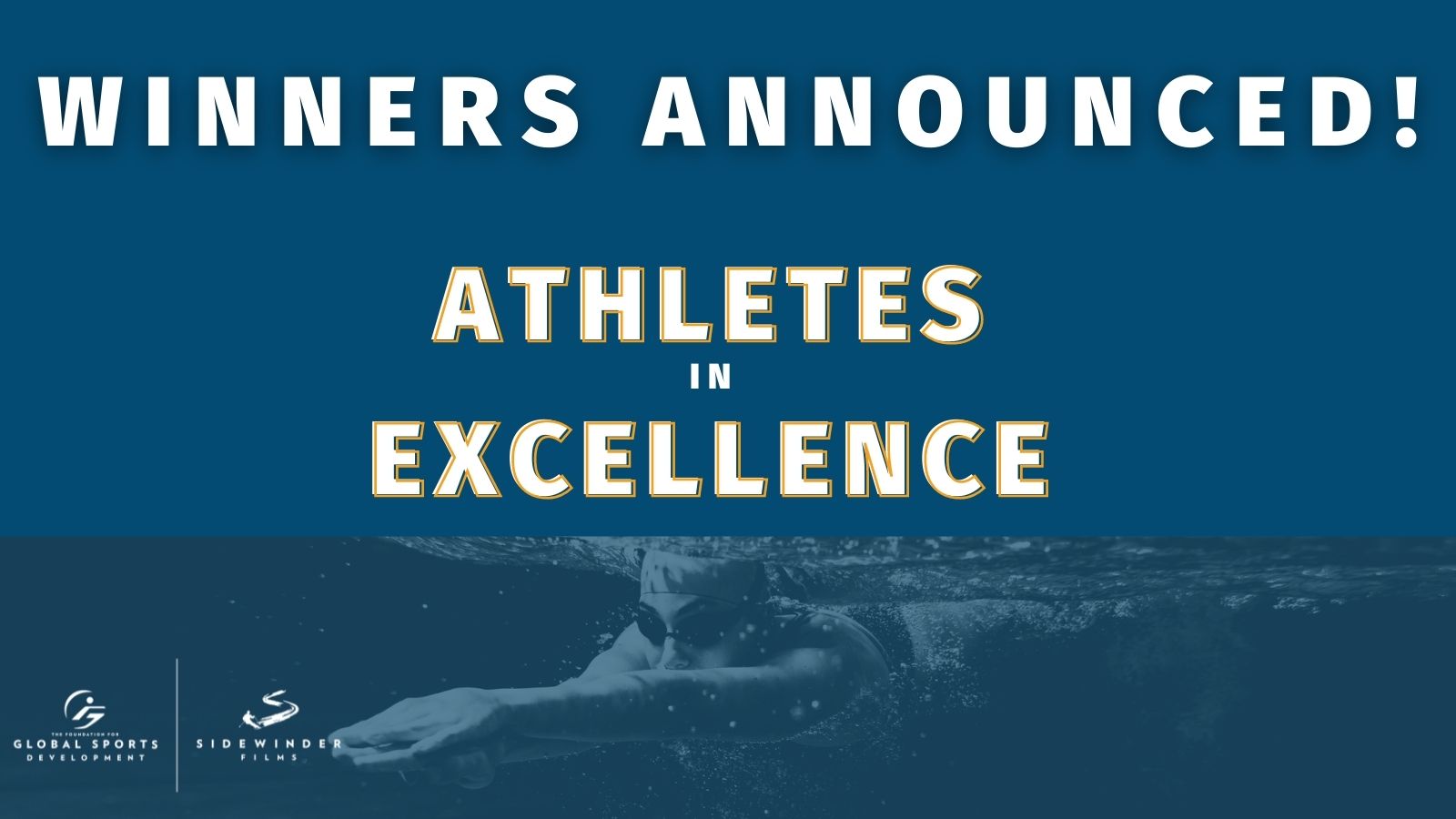 The award recipients will receive a $10,000 cash award to further their community service and mentorship efforts.

Los Angeles, Calif. – October 28, 2021 – The Foundation for Global Sports Development (GSD) announced today the ten recipients of its 2021 Athletes in Excellence Award. The award recognizes elite-level athletes whose remarkable achievements in sport are matched only by their dedication to community service and mentorship. Established in 2014, the Athletes in Excellence Award is accompanied by a $10,000 cash prize, empowering the winners to continue their inspiring and impactful work.

“The winners of our Athletes in Excellence Award have gone beyond sport to create meaningful change in their community,” said GSD Executive Board member, David Ulich. He continued, “As a foundation, we applaud their efforts and are honored to support their future endeavors.”

GSD Executive Board Member, Dr. Steven Ungerleider, added, “From delivering clean water to their neighbors in Flint, Michigan, raising funds to establish a wheelchair curling league, and implementing positive coaching techniques with underserved student athletes, these Athletes in Excellence Award winners are inspiring to us all. We hope their actions and positive attitudes motivate youth and adults to become a force for good in their own communities.”

For additional details about the Athletes in Excellence Award, please visit www.globalsportsdevelopment.org.\

Lisa Briege Finegan (Rugby) Lisa is known internationally for her achievements on the rugby pitch, both as a competitor and a coach. In 2020, Lisa received the World Rugby 7’s Series USA Developmental Coach of the Year Award, in recognition of her innovative style of coaching that incorporates Social and Emotional Learning and a philosophy of inclusion. She has worked to incorporate leadership programs for student-athletes, striving to develop the whole person through positive coaching. Nominated by Stuart Krohn.

Kym Crosby Hightower (Track Paralympian) Kym is a competitive sprinter and Paralympic Bronze medalist known as “The Flash” for her speed. She is an ambassador for Challenged Athletes Foundation, sharing her experiences of being a blind athlete with audiences of all abilities. Kym has volunteered as a coach to middle and high school students through the High School Adaptive Sports Program, bolstering CAF’s efforts to go virtual during the COVID-19 pandemic. Nominated by Challenged Athletes Foundation.

Rudy Garcia-Tolson (Swimming Paralympian) Rudy’s athletic achievements in the pool – he has garnered five Paralympic medals – are as impressive as his mentorship efforts. As an ambassador for Challenged Athletes Foundation and athlete mentor for Ready, Set, Gold!, Rudy is a role model for young people, particularly those who also have physical disabilities and are encouraged to see Rudy making a splash in sports and the world. Nominated by Challenged Athletes Foundation.

Cody Michael Jones (Javelin Paralympian) Cody is an athlete mentor with Ready, Set, Gold!, teaching students in Southern California and beyond about the importance of healthy habits around nutrition, sleep, and being active. He also volunteers with Angel City Sports, providing virtual and in-person coaching to young people with disabilities. Cody recently wrote a children’s book titled, “Henry Makes It On Top,” which can serve as an aid for teachers and parents in their conversations about disabilities and how to treat people with respect. Nominated by Ready, Set, Gold! and Angel City Sports.

Amanda McGrory (Cycling Paralympian) Amanda is highly active in promoting the Paralympic Movement. She volunteers as a coach for the University of Illinois wheelchair basketball and wheelchair racing camps, is working with the Chicago Marathon to establish a mentoring program for local wheelchair racers, and visits schools to educate youth about adaptive sports and disability. Nominated by Dr. Anjali Forber-Pratt.

Linnell Jones-McKenney (Basketball – African American Sports Hall of Fame Inductee) – Linnell is highly active in her local community of Flint, Michigan, with decades of community service experience. She has worked to bring clean bottled water to Flint residents, provide school supplies and clothing to underserved students, connected with youth through mentorship and sport, and worked to prevent youth violence, teen pregnancy, gang violence while encouraging students to graduate high school and become leaders in their community. Nominated by Shan Buckley.

Stewart Pimblett (Wheelchair Curling and Wheelchair Basketball) Stewart founded the Northern Ice Wheelchair Curling Club and Charity, spending countless hours fundraising to connect other people with disabilities to curling. His efforts have resulted in the team being able to travel to international competitions. Stewart’s commitment to the sport and serving as a curling ambassador have positioned him as a role model to curlers and disabled athletes. Nominated by Angie Malone.

Cyrille Fagat Tchatchet II (Weightlifting Olympian) Cyrille was a member of the Refugee Team at the 2020 Summer Olympic Games in Tokyo. After experiencing trauma, homelessness, and food insecurity, Cyrille earned a degree in Mental Health Nursing from Middlesex University. He now serves patients facing mental health challenges and is a spokesperson for athletes who are refugees. Nominated by Lawrence Bottinck.

Wellington Zaza (Hurdler) Wellington was born in Liberia, and after living in refugee camps in the country, he immigrated to Philadelphia, PA. He has connected with his community through his organization No Lack in Lifestyle. Wellington uses sport to engage young people to focus on academic success and physical fitness. His positive attitude and drive to create tangible change influence all around him. Nominated by Sam Effah.