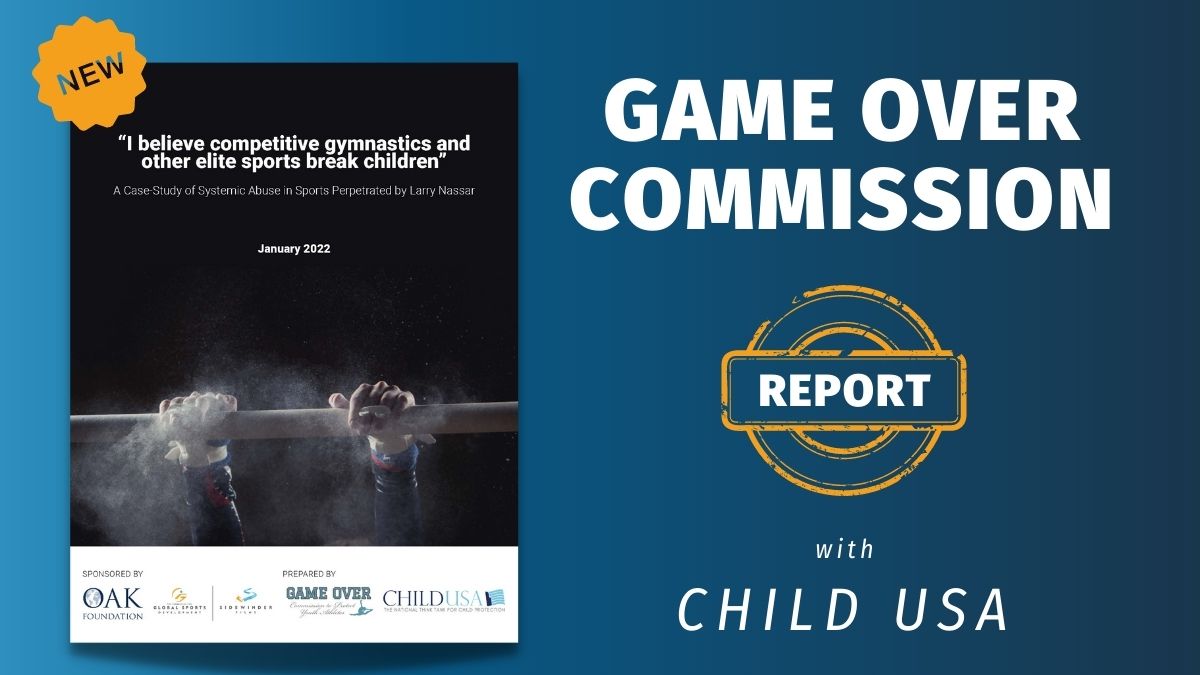 First-Of-Its-Kind Independent Study from CHILD USA Finds That Not A Single Investigated Institution Has Adequate Policies In Place to Stop Cycle of Emotional, Physical, and Sexual Abuse of Athletes

Ahead of the 2022 Olympic Games, CHILD USA is releasing the first-of-its-kind “Game Over Commission” and calling on Congress to create a federal agency responsible for oversight of the U.S. Olympic system. The Commission is the first and only independent investigation into the systemic and institutional failures that created an environment where physical, mental, and emotional abuses were not just tolerated but widely accepted, allowing Dr. Larry Nassar to prey on hundreds of gymnasts for years with impunity, and continue to leave countless young athletes and students at risk of all sorts of abuse today.

The report—authored by 14 leading national experts in child sex abuse prevention, law enforcement, academia, trauma, sports, and investigative journalism—features a first-of-its-kind case study on the Nassar case; independent surveys of Nassar’s victims and other elite athletes; and puts forth a clear set of policy recommendations to help prevent further abuse of young athletes, both at federal and state levels and within athletics organizations. The Commission was sponsored by the Oak Foundation and The Foundation for Global Sports Development with contributions from the National Children’s Alliance and White Law PLLC.

The Commissioners found that every single institution they investigated—including the United States Olympic and Paralympic Committee (USOPC), USA Gymnastics (USAG), Michigan State University (MSU), training centers, the FBI, and others—have inadequate protections in place to stop sexual, physical, mental, and emotional abuses from happening now or in the future.

“Before today, no study has systematically explored the victims’ experiences of the circumstances – including sport culture, trust, beliefs and social norms, and regulatory norms – that contributed to the extreme duration and sheer volume of Larry Nassar’s crimes,” said Marci Hamilton, Founder and CEO of CHILD USA. “The time is long past for action to fix systemic failures that continue to enable the abuse of young, elite athletes. This groundbreaking new independent report not only sets a new standard for understanding how institutions continue to fail their athletes, but offers clear next steps for both governmental and non-governmental bodies to finally end this endemic cycle of abuse.”

“Youth athletes are among our country’s most vulnerable children,” said Teresa Huizar, executive director of National Children’s Alliance and a Game Over Commissioner. “This study not only effectively details how and why youth sports are fertile ground for institutional abuse and coercive treatment of children at every level of competition, but makes a revolutionary case for the solutions we must pursue to protect children. Inaction is not an option.”

The report outlines six key findings based on independent surveys and the Commissioners’ research:

The Commissioners’ final recommendations include:

To view the full list of recommendations, see page 50 here.

To produce this case study and set of recommendations, the Commissioners held hearings with athlete survivors; completed a large-scale document review of materials related to the case; conducted surveys of elite athletes on abuse prevalence, mental health issues, and other contextual factors; and reviewed best practices from outside institutions.

“All of us felt the fear of coming forward because we were afraid of losing scholarships, the chance to represent our country in international competitions, and the Olympic dream,” said former Olympic diver John-Michael Lander, who was abused by several men who provided financial support for his athletic career. “It was reinforced in each of us that we were just numbers and that there were many more waiting to take our place and to take advantage of this incredible offer. Fear led us to be silent.”

CHILD USA convened the Game Over Commission in 2018 to launch the only independent body of experts in the field of child sex abuse to study how it was possible for one man to destroy the lives of so many athletes. The commissioners contributed their time and expertise pro bono to serve the public interest and advocate for change so no young person has to endure the same fate as Nassar’s victims.

“This landmark report comes at a critical point in sport where clear guidance – backed by data – is needed to change our systems,” said Game Over Commissioner Dr. Steven Ungerleider, CEO of The Foundation for Global Sports Development and sports psychologist. “We all have a responsibility to keep athletes safe, and with this report CHILD USA and the commissioners have provided a roadmap.”

In just the past year, several leaders from across elite sports, including Stan Bowman of the US Men’s Olympic Hockey Team, NWSL Commissioner Lisa Baird, and Paul Riley of the North Carolina Courage, have been credibly accused of either abuse themselves or intentionally concealing the harmful actions of others. This report empowers institutions and individuals to better identify the structural problems that protect predators and leave young people vulnerable to abuse, and begin implementing the necessary reforms to keep children safe.

About CHILD USA CHILD USA is the leading national nonprofit think tank working to end child abuse and neglect in the United States. CHILD USA engages in high-level legal, social science, and medical research and analysis to derive the best public policies to end child abuse and neglect in America. CHILD USA produces evidence-based solutions and information needed by policymakers, organizations, media, and society as a whole to increase child protection and the common good. Visit http://www.childusa.org for more information.